Action star Dwayne “The Rock” Johnson has teamed up with Apple for an action-packed long-form Siri commercial, entitled “The ROCKxSIRI Dominate the Day.” 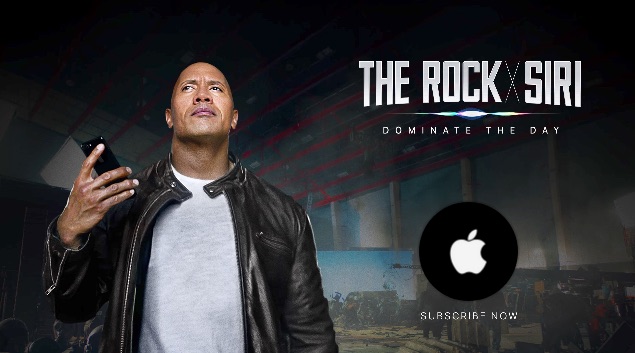 Johnson tweeted to promoted the “movie” on Sunday:

Teamed w/ @Apple to make the biggest, coolest, sexiest, funnest (is that a word?) movie ever. Drops TOMORROW!#ROCKxSIRI #DominateYourDay✊? pic.twitter.com/STwlCPsVUh

The video, which can be seen below, or on Apple’s YouTube channel, shows how The Rock uses Siri to “dominate the day.”

Apple’s blurb about the video:

You should never, ever, under any circumstances, underestimate how much Dwayne Johnson can get done in a day with Siri. Follow the world’s busiest actor and Siri as they dominate the day. Learn more about Siri at http://siri.com

The long-form commercial, coming in at 3 minutes and 45 seconds, shows The Rock getting ready for the final scene in his latest sci-fi action film. But before he films that final scene, he’s involved in a high-speed car chase, flies a jet to Rome, paints the Sistine Chapel, orbits the earth, and more, all managed by Siri.

I don’t want to spoil the ending, but The Rock gets back in time to nail the final scene in his movie, all aided by Apple’s virtual personal assistant. (NATCH!)