Apple has announced it will share its quarterly earnings information for the second fiscal quarter of 2018 on May 1. The numbers will give us insight into sales for the first calendar quarter of this year. 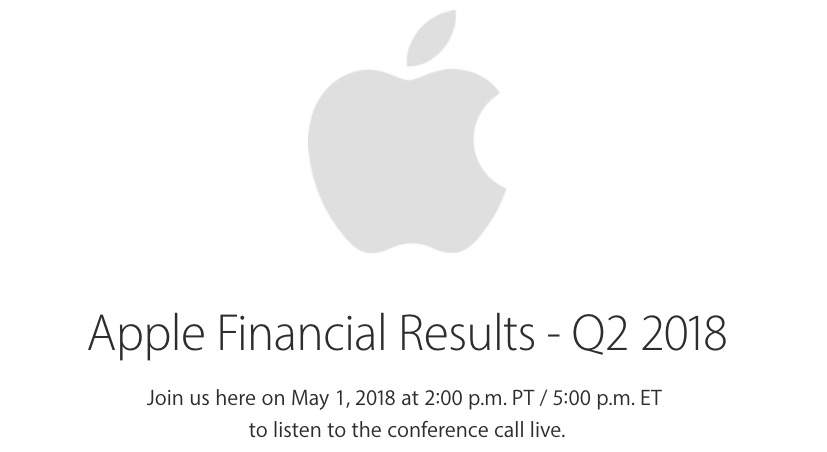 The report will be released just ahead of a scheduled conference call on Tuesday, May 1 at 5 PM Eastern/2 PM Pacific. Apple CEO Tim Cook and CFO Luca Maestri. The two are expected to share details about the Cupertino firm’s Q2 2018 performance and will also answer questions from investment analysts.

The iPhone maker posted record breaking revenue numbers in the previous quarter with $88.3 billion in revenue. However, iPhone sales were down 1.2% year-over-year. It is believed the higher price of the company’s flagship iPhone X handset contributed to the sales slowdown.

However, the company’s CEO, Tim Cook during the Q1 phone call said the iPhone X was the company’s bestselling handset every week since it first began shipping in November 2017.

The earnings call will be live streamed on the Apple website, starting at Tuesday, May 1 at 5 PM Eastern/2 PM Pacific. The company says the stream is best experienced on an iPhone, iPad, or iPod touch using Safari on iOS 10 or later; a Mac using Safari on macOS Sierra 10.12 or later; or a PC using Windows 10 and Microsoft Edge. Streaming to Apple TV via AirPlay requires an Apple TV (2nd generation or later) with the latest Apple TV software or tvOS. Other platforms may also be able to access the stream using recent versions of Chrome or Firefox (MSE, H.264, and AAC required).

We’ll report the numbers the company shares, following the call.