Those of us that grew up in the 60s and 70s fully expected to own robot vacuum cleaners and nuclear-powered flying cars by the time we became adults. Well, considering the way people drive these days, batting .500 isn’t too bad. I have long wished to have a small robot vacuum cleaner to help out with the cleaning chores around my house, but the expense of anything more than a basic model always kept the dream out of reach. Enter the Ecovacs DEEBOT 901.

The Ecovacs DEEBOT 901 is an intelligent, learning robot vacuum that learns the layout of your home as it cleans. The 901 scans and maps your living space, allowing you to customize and set boundaries for the little (dust) devil’s cleaning duties.

The DEEBOT 901 looks similar to other robot vacuums of this type, meaning it is a disc shaped unit, measuring in at 13.9-inches in diameter by 3.3 inches tall. The unit’s color scheme is black and gray, which fits in with what I have in mind for a robot vacuum, which is that you shouldn’t even notice it as it goes about its business, once the novelty wears off, that is.

The DEEBOT 901 is easy to set up, and everything you need is in the box, including your first set of replacement brushes and filter. Simply take the DEEBOT out of the box, pop on the side brushes, and turn it right-side up and place it on its charging dock. The vacuum will take around 4 hours to fully charge.

Once charging is complete, you use the Ecovacs app on your iOS or Android device to connect the DEEBOT to your home Wi-Fi network and update the vacuum’s firmware, assisted by helpful voice prompts from the DEEBOT along the way.

In addition to the usual sensors built-in to many robot vacs, the DEEBOT 901 boasts on-board laser-guided navigation that allows it to scan and map your home to provide the most efficient cleaning of your living space. Sadly, the laser is invisible, and doesn’t display the cool effect shown in the Ecovac-supplied promo shot seen above.

On its initial voyage, the DEEBOT may seem to be approaching its task rather randomly, but it is merely exploring its environment, allowing its onboard sensors to map your home.

The 901 remembers the layout of your home, saving it to a map that is viewable in an app that runs on your iOS device. The map allows users to track where the 901 is currently working, and also allows setting up no-go zones to keep the DEEBOT from getting into trouble.

In addition to its smart mapping features, the DEEBOT can be controlled via the app, or by voice commands using Google Home or Amazon Alexa-compatible smart speakers. We have opted for Amazon’s Alexa system in our home, with an Amazon device in most every room. It truly feels like you’re “living in the future” when you say, “Alexa, ask DEEBOT to start cleaning.” You can also command the DEEBOT to stop cleaning or to start charging via an Alexa voice command.

Ecovacs says the DEEBOT 901’s battery can provide up to 100 minutes of cleaning. In actual use, I found the unit would operate for around 80 to 90 minutes in standard cleaning mode, which is more than enough time to give my 1,600 sq. foot bedroom apartment a thorough cleaning.

When I put the DEEBOT into “Max” cleaning mode, which steps up the vacuum power, I usually see the vacuum heading back to its charging dock in 65 minutes or so. Your mileage may vary. In all cases where the DEEBOT ran out of juice before finishing its cleaning route, it automatically returned to its charging dock to replenish it’s batteries, picking up where it left off once it was refreshed.

I found the DEEBOT 901 to do an excellent job of cleaning our apartment. In said apartment, we have a variety of carpeted and wood surfaces, with the occasional throw rug and area rug thrown in to up the challenge. This provided a challenge to the DEEBOT, as the differences in thickness between the wood and carpeted areas provided a bit of a hurdle to get over.

The DEEBOT was able to handle the various rug and carpet bases obstacles, even when it couldn’t at first make it over the hump, so to speak. When presented with a step up to a carpeted area, the DEEBOT first attempted a straight-on approach. When that proved unsuccessful, it then attacked it from an angle, and if that proved fruitless, it then – much to my amusement and wonder – lifted itself up and appeared to step up onto the thicker rug. While this does not bode well for humans when the robot masters take over the world, for current cleaning purposes it’s a wonderful thing. 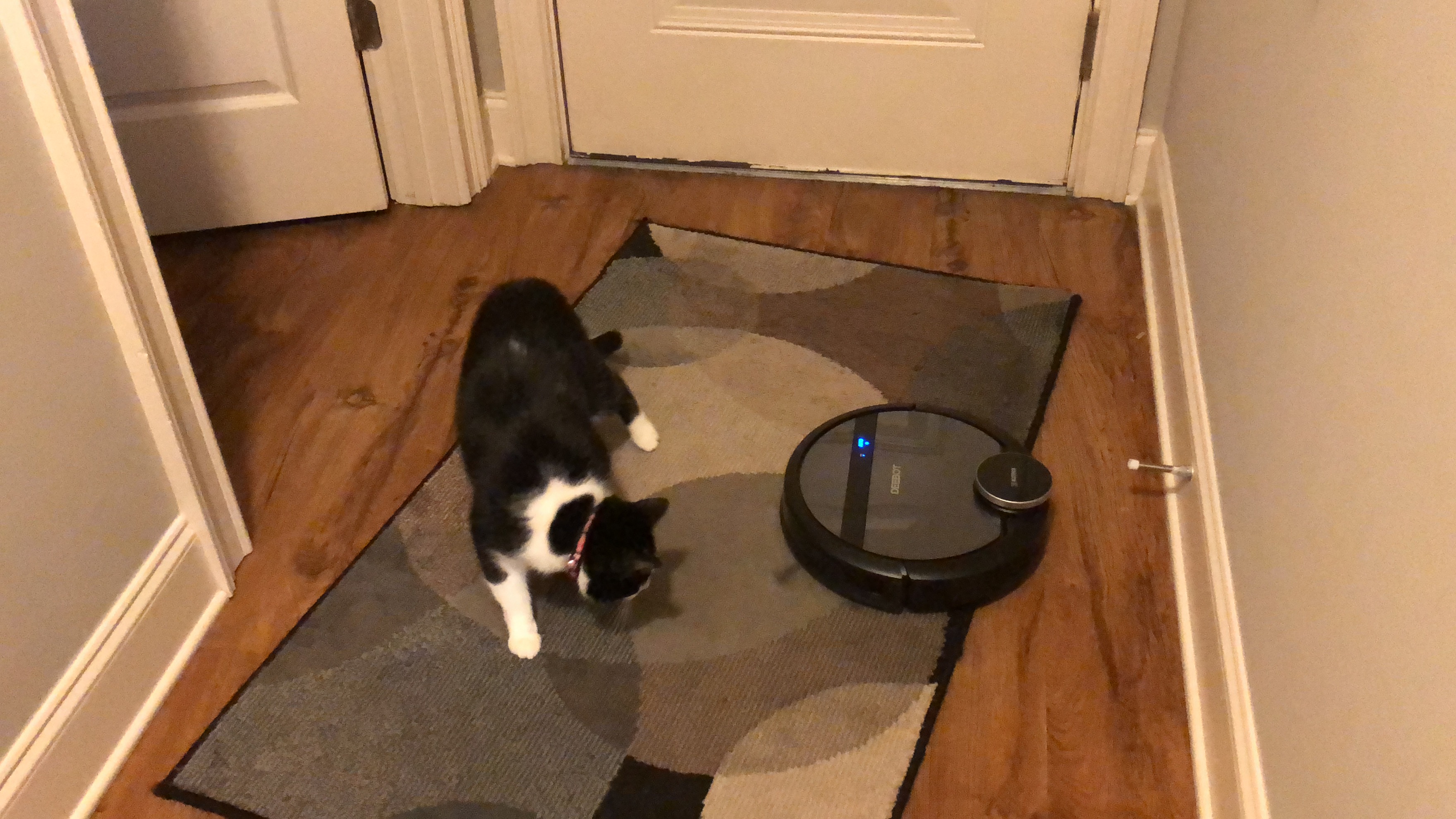 Furniture proved to be no match for the DEEBOT 901, although it didn’t slam itself into the furniture as I have seen other robovacs do. Instead, the vacuum’s sensors allowed it to gently explore areas where furniture and other obstacle were present, even when it was performing its initial mapping of my apartment on its maiden voyage.

I found that once the apartment was mapped, the DEEBOT remembered the layout, efficiently going about its business on later journeys. I began using the DEEBOT right after we moved into a new place, and there were still boxes we had yet to unpack laying around the apartment. These were duly mapped on the DEEBOT’s initial run, but after they were gone, the vacuum was smart enough to notice, and begin including the newly exposed area in its cleaning ritual. Again, no where to run to, nowhere to hide when the robot uprising begins. 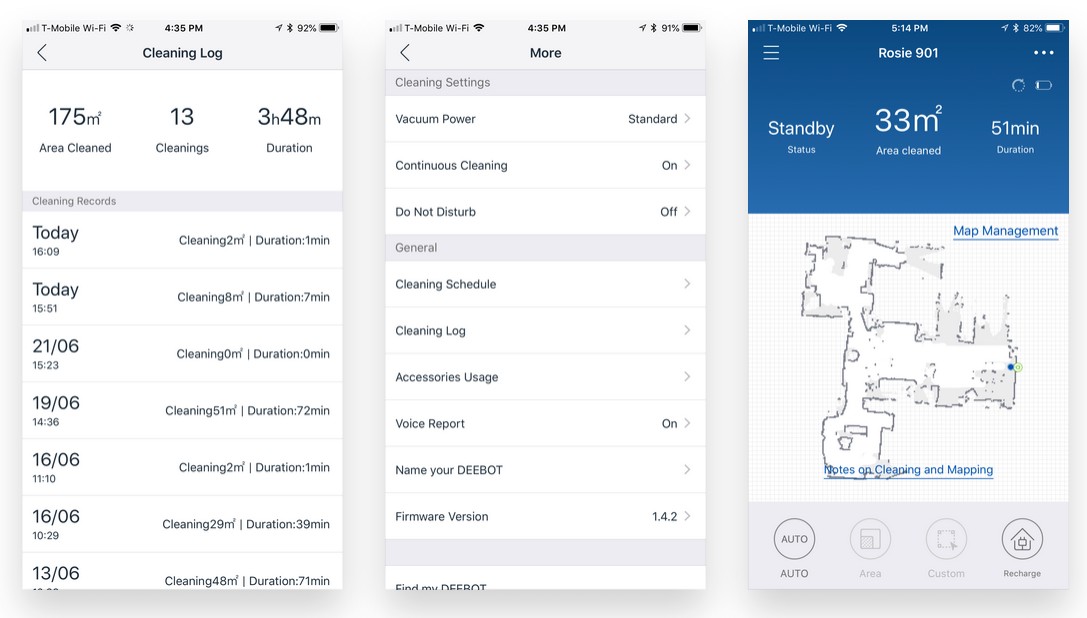 The Ecovacs DEEBOT 901 does a great job of avoiding trouble, grabbing a stray cable or cord only a few times, and in those cases, it was a lack of foresight on my part that caused the issue, and the cords were easily extricated from the maws of the vacuum.

I fully expected the DEEBOT to get stuck when it was exploring under our beds and around our couches and tables, but I have been impressed by its ability to stay out of trouble. Only once has the vac gotten stuck, and when it couldn’t free itself, it announced its predicament, and shut itself down until I set it free.

The DEEBOT did an excellent job of picking up dust, dirt, and the fur left behind by our two cats, one of which has a severe shedding problem. I found I needed to empty the admittedly small dust compartment at least twice during a vacuuming run, and three times when I had the vacuum power set on “Max.” It should be noted the small dust compartment is standard for vacuums of this type.

The vac offers an interchangeable inlet system, which allows users to replace the main brush with a direct suction inlet, which is recommended for users with pets. I prefer to use the brush and clean the dust compartment a few times per session, but it’s up to you.

The DEEBOT 901’s main and side brushes, as well as its filter, will require eventual replacement, but the Ecovacs app allows you to keep track of how those accessories are faring, allowing you to order new supplies before needed. I have been using the DEEBOT for over a month now, and my accessories are just now down to 90% of life left, so the vac won’t nickel and dime you to death buying supplies. 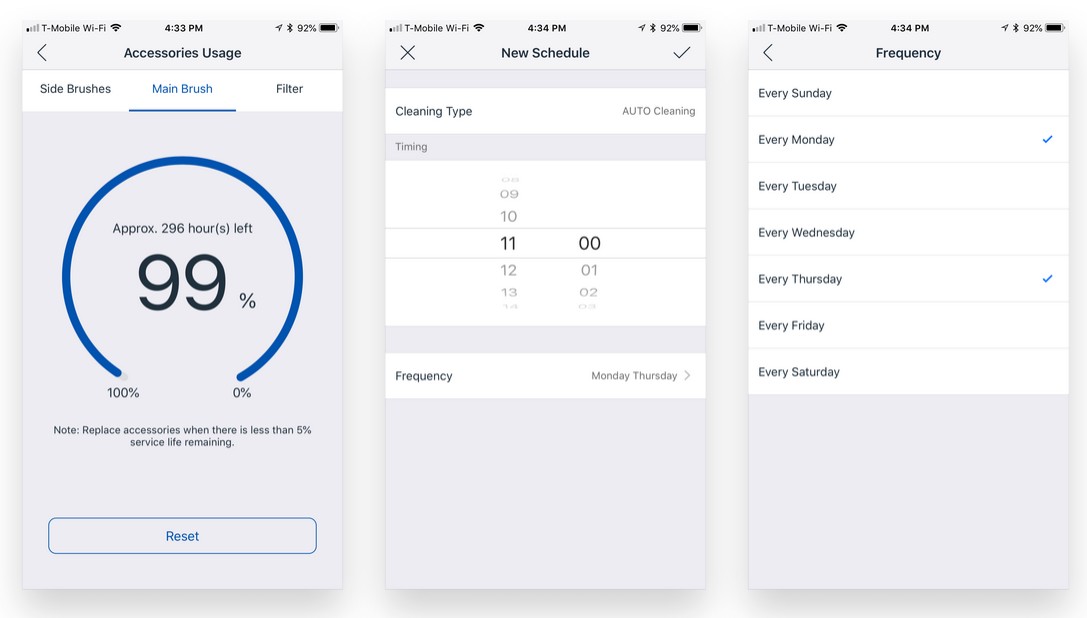 The app also allows users to schedule cleanings as often as they want.

As far as noise goes, you’ll hardly hear the DEEBOT as it goes about it cleaning chores. Even on the Max setting, there is no roaring sound as you may be used to from normal vacuum cleaners.

I am greatly impressed by the Ecovacs DEEBOT 901. The robot vac was easy to set up out of the box, and took only minutes to connect it to my home Wi-Fi network and prepare it for its first run.

The Ecovacs DEEBOT 901 does an excellent job of cleaning the multiple types of surfaces in our home, and handles the varying thicknesses of our rugs and carpet with aplomb. Now if I can just get the cats to stop freaking out whenever it begins a cleaning run.

The Ecovacs DEEBOT 901 is available from Amazon. While the suggested retail price is $399.98, Amazon is currently offering the DEEBOT 901 for just $299.98. The ECOVACS Accessory Kit, which contains the replenishables for the DEEBOT, is also available at Amazon, for $34.99.

Disclaimer: The Ecovacs DEEBOT 901 was provided to me at no cost for review. All views, experiences, and opinions are my own.