In an Apple press release from Wednesday, the Cupertino firm shares how teachers across Europe are using the iPad to aid them in working with students in  multilingual classrooms.

The release highlights teachers at the Dusseldorf, Germany-based Wilhelm Ferdinand Schussler Day School, where iPads are being used to prepare lessons for immigrant students that have fled violence and war in the Middle East. In some cases, the new arrivals have never stepped foot in a classroom before. 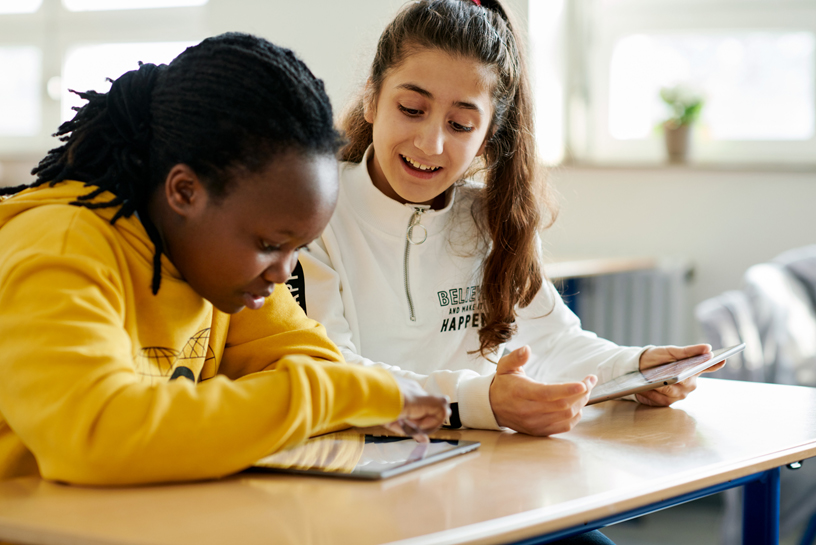 Teacher Nick Kyriakidis, 47, and his colleague Sinaan El Haq Hadjeri, 31, alternate teaching the class on different days. They both say the iPad is one of the best tools they have to help the children learn at their own pace.

“Kids withdraw when they’re afraid of [making] mistakes,” says Kyriakidis. “If we try to reduce this fear, it’s much easier for them to work with us because they don’t have anything to lose.”

“With iPad … it’s different than when they write something [on paper] and I come in with my red pen and say ‘that’s wrong,’” says Hadjeri. “[With iPad] they learn for themselves.”

The Wilhelm Ferdinand Schussler Day School’s 1:1 iPad program provides each student with access to their own iPad. 100% of the participants in the program have graduated, which is a 20% increase over previous results.

Similar programs are in process at other schools in Europe.

Students at College Daniel Argote in Pau, France are sent home with an iPad containing a video lesson recorded by their teacher. The next day they work through their “homework” in class.

At Stenkulaskolan School in Malmo, Sweden, where 98% of students speak Swedish as a second language, teachers report an 80% leap in math grades since they began sending students home with instructional videos.

St. Cyres School in Penarth, Wales reports that students in the senior English as an Additional Language class of 2018 that worked with an iPad increased their grades by an average of 3.8 points during the year.

For more information, be sure to read Apple’s full press release.