Apple says the M1’s octa-core GPU can simultaneously handle close to 25,000 threads and deliver up to 2.6 TFLOPS of throughput. This compares evenly with the TFLOPS achieved by the Radeon RX 560 and ranks just below the GeForce GTX 1650’s 2.9 TFLOPS. 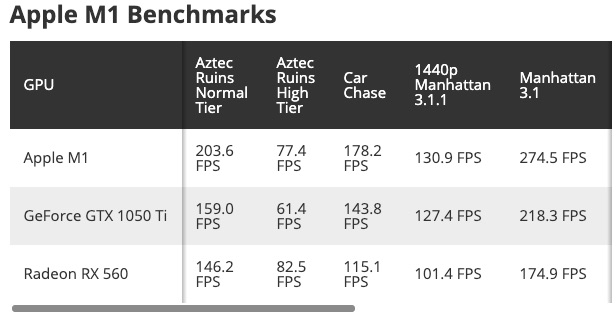 The anonymous benchmark user tested the M1 under Apple’s Metal API, making an Apples-to-apples comparison a bit difficult. Currently, no one has submitted a Metal run using the GeForce GTX 1650, although there is a submission for the GeForce GTX 1050 Ti. 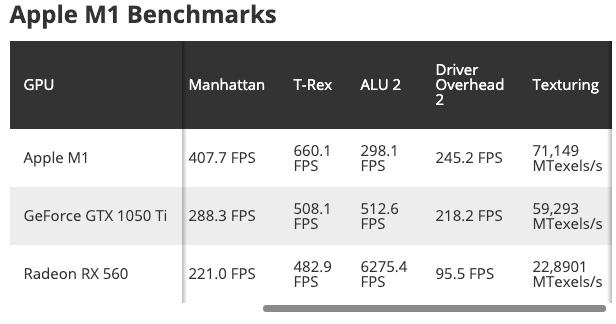 In the Aztec Ruins Normal Tier test, the Radeon RX 560 achieves 146.2 FPS, the GeForce GTX 1050 Ti hits 159 FPS, and the M1 tops out at 203.6 FPS. Similar results are seen across the board, with the M1 almost consistently surpassing the performance of the two desktop GPUs.

It should be noted that the GeForce GTX 1050 Ti and Radeon RX 560 are both older GPUs and that GFXBench 5.0 benchmarks are primarily used to test mobile devices. However, the fact that the integrated graphics in the M1 can outperform desktop graphics cards is still impressive. We’ll likely see other GPU comparisons very soon, as the first M1-equipped Macs begin arriving to customers this week.