Facebook continues its attacks on Apple, running a series of full-page newspaper ads attacking Apple’s iOS 14 privacy changes. Facebook says the changes, which are related to data gathering and targeted advertising, are bad for small businesses.

Bloomberg reports the ads are running in the New York Times, Wall Street Journal, and Washington Post, featuring the headline “We’re standing up to Apple for small businesses everywhere.” 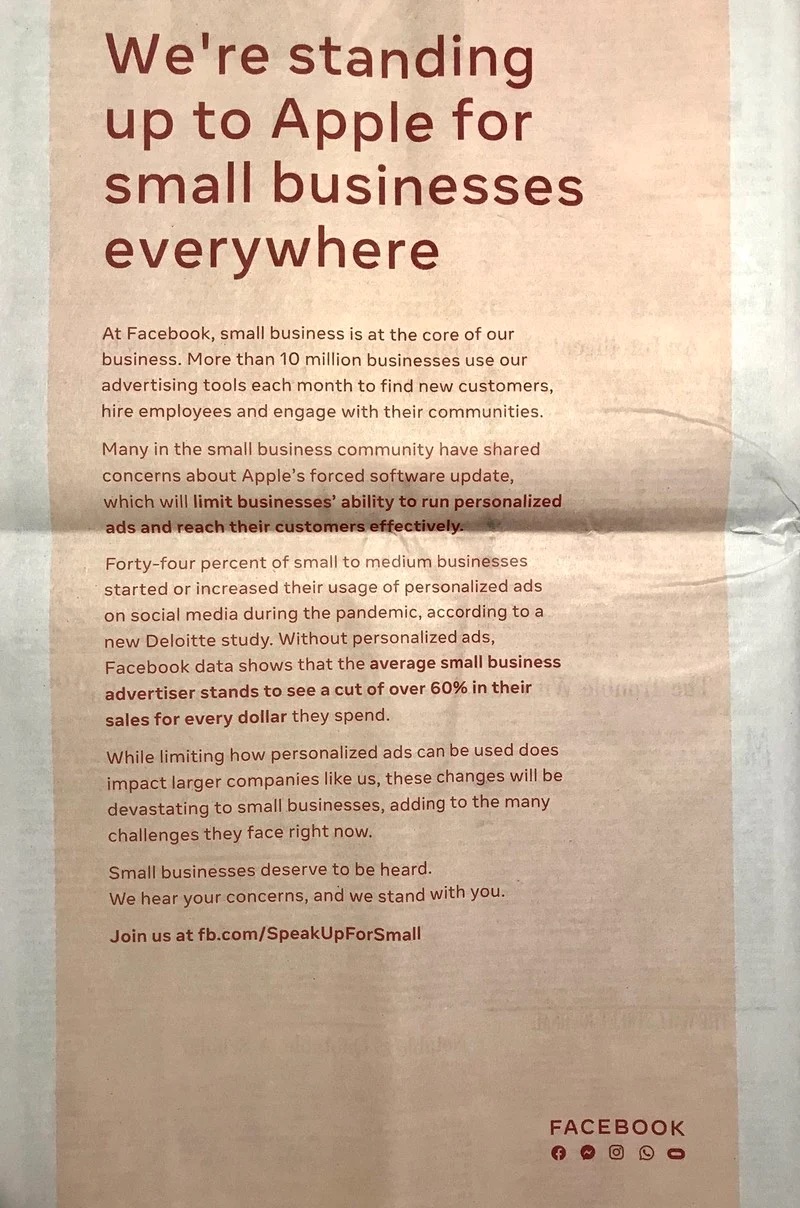 Apple has recently made a number of privacy changes that limit the ability of companies that glean user info and sell it to advertisers and use it to target ads (like Facebook). As of iOS 14, Apple changed the “Identifier for Advertisers” – which is used by many companies like Facebook for ad targeting – an opt-in feature. The move allows users more transparency when it comes to being tracked on websites and in apps.

Users can also disable the option for apps to track them at all in the Privacy portion of the iOS 14 Settings app. Even if the user opts to turn this feature off, apps must still inform the user and ask for permission before tracking them across apps and websites owned by other parties. (Facebook will track users across the web, even when the Facebook website or app is closed.) This is a severe blow to the silent ad-related tracking that has become prevalent over the years.

Facebook’s Mark Zuckerberg earlier this year said the anti-ad tracking feature could cut the Audience Network Ad revenue companies earn through Facebook by as much as 50%.

In response to the criticisms, Apple delayed the rollout of the new privacy measures, saying Facebook is making clear its intent “to collect as much data as possible across both first and third party products to develop and monetize detailed profiles of their users, and this disregard for user privacy continues to expand to include more of their products.”

Facebook’s ad campaign is just the latest move by the social network, which has heavily criticized Apple in recent months, over the Cupertino firm’s App Store policies and fees structure. It has also accused Apple of anti-competitive behavior, such as not allowing another app to be selected as the default messaging app in place of iMessage on iOS.

Last week, Facebook-owned WhatsApp decried Apple’s new App Store Privacy Labels, saying the labels might discourage users from installing its app. (Gee, I wonder why?) The messaging giant also said Apple’s iMessage is pre-installed on iPhones and doesn’t require a download from the App Store, where the new privacy labels will be shown.

Apple responded, saying apps that are built-in to iOS – such as Messages, Apple Music, and others – will have their privacy information published on Apple’s website. Apple says the information will be presented in the same way as it appears in the App Store.