If you’re like me, you have a hard time finding a keyboard that you really enjoy typing on. I’ll admit my preferences were set back in the 90s when I used IBM PCs and PC-compatible machines that used mechanical “clicky” keyboards.

Since then, I have had issues in finding a keyboard I’ve enjoyed using, especially since I made the move to the Mac 14 years ago. I did find that I enjoyed using the Keychron K1 keyboard, and I have used it ever since I reviewed it back in March 2019. Recently, Keychron reached out to me and asked me if I’d be willing to review their K2 Wireless Mechanical Keyboard.

While the original version of the K2 had received an excellent review from a fellow MacTrast reviewer back in January 2020, the K2 is now available in version 2. So, I agreed to review it. I’ve been using it for the last few months, and I have to say, it may be the best mechanical keyboard I’ve ever used for a Mac.

The Keychron K2 Wireless Mechanical Keyboard is a compact 84-key mechanical keyboard, boasting a Mac key layout right out of the box. (That means it offers a Command and Option Key as a default, although Windows keycaps and a keycap tool are included in the box.) The keyboard offers convenient switches on the side that allow Quickly switching between Bluetooth and wired operation and Mac/Windows usage.

The keyboard can be used on up to three devices via Bluetooth (iOS and Android as well as Mac and Windows) and can also be connected to your Mac or Windows machine via the included USB-C cable, which also charges the keyboard’s battery while you’re using it.

I was supplied with the RGB Backlight Aluminum Frame model with Blue Switches ($89 USD). The keyboard is also available in a plastic framed White Blacklight model ($69) as well as a plastic framed RGB Blacklight model ($79). All three models are available with red, blue, or brown Gateron switches that are said to have a lifespan of 50 million keystrokes. I’ll let you know if I ever reach that milestone. The blue switch model I have is the “clickiest” of the three switch options, providing excellent feedback on every stroke.

During my two-month testing period, I found the keyboard to be definitely clicky and loud. If you share a workspace with other humans, or even a particularly high-strung or irritable cat, you might want to consider the red or brown switches.

One other caveat, if you are used to a MacBook keyboard, an Apple Magic Keyboard or one of its many clones, or any of a hundred other mushy keyboards, it will take a while to get used to the Keychrom K2 blue switches. I found that I needed to press the keys a bit harder to get them to register at first until I got used to pushing the keys a bit harder. Now that I have gotten used to the K2, I may never be able to go back.

While I cut my operational eyeteeth on full-sized keyboards that included a numeric keypad, my current desk configuration requires a compact keyboard. I have tried others, including the Keychrom K1, and the K2 offers the best layout I’ve found in a compact keyboard.

The Keychron K2 offers RGB backlighting, which can be configured to light up in 18 color and pattern combinations. While the multi-colored “light show” effects are popular among gamers, I prefer the “normal” white backlighting, finding the lighting to offer just enough lighting for my needs. The Keychron-provided video below shows off the available lighting options. It should be noted that the lettering on the keys actually displays brighter than it appears in the video.

A single switch in the upper-right hand corner of the keyboard controls the lighting. The only bad part about that is that it is directly next to the delete key, and lousy typist that I am, I have accidentally hit the lighting key when I meant to hit delete, requiring me to cycle through the numerous lighting options until I arrived at my favorite white backlighting.

The keyboard’s Bluetooth 5.1 wireless connection was reliable and stayed connected with my 2016 MacBook Pro, as well as my M1 Mac mini, even before the macOS Big Sur update that fixed the M1 Mac mini’s Bluetooth issues. Keychron says the K2’s 4000 mAh battery lasts for up to 240 hours of typing with the backlight off. I was able to use it for up to two weeks on Bluetooth (I work six days per week, 5 to 12 hours per day), before charging it.

The only issue I had while using the K2 on Bluetooth was that the keyboard powers down a little too soon for my tastes, requiring an extra keypress to activate it. However, I pause quite a bit when typing, as I am researching and checking notes while working. I’d venture to say most users won’t have an issue. The keyboard also worked well on Bluetooth with my iPad, as well as my Windows machine.

I also accidentally found that the Keychron K2 stands up well to water spills. My office cat, Toni Stark, enjoys leaping up into my arms to demand attention when she feels neglected, and once when she decided to demand her due, she jumped into my arms just as I was returning an open bottle of water to its usually safe spot on the desk. The bottle flew from my hands, all over the desk, as well as all over the Keychron K2. I immediately unplugged the keyboard and dried it the best I could. I let it dry overnight and the K2 returned to service the next day, none the worse for the wear.

I should note that the K2 sits a bit higher than many compact keyboards I’ve tried, especially the Apple Magic Keyboard. If you’re used to a low-profile keyboard, you could face some wrist strain. However, Keychron was also kind enough to provide a Keyboard Wooden Palm Rest that could be used with the keyboard to provide ergonomic support. 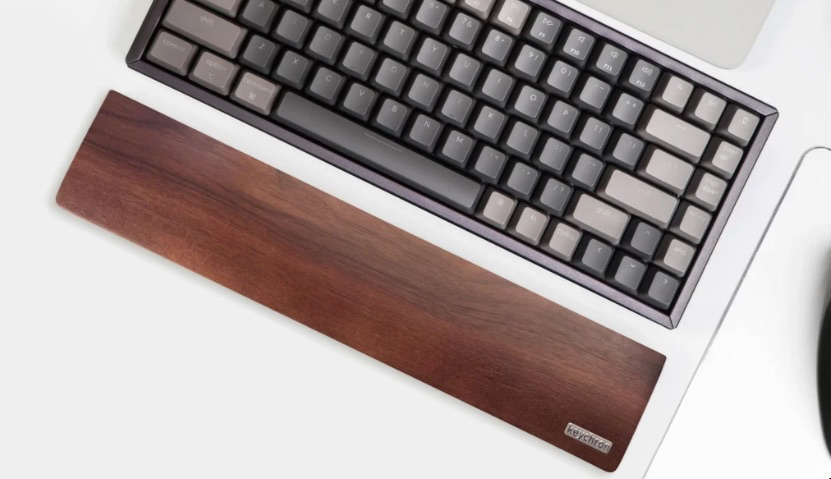 Overall, using the Keychron K2 has been an overall enjoyable experience. For the last two months, I have used it on a daily basis, and it has performed quite well. While the overall clickiness of the K2 might bug some users, I find it reminiscent of the IBM keyboards of old and enjoyed the typing experience.

The Keychron K2 is a solidly-built device, and Mac and Windows users will enjoy the well-built text entry device. Gamers will also appreciate the keyboard’s backlighting options, as well as its reliable input abilities.

In answer to the question of “Is This The Best Keyboard for The Mac?” I’d have to say it’s the best one I’ve tried so far. Your mileage may vary, but I strongly recommend that you give the Keychrom K2 a try.

Disclosure: This product was supplied to me at no cost for review. All thoughts and opinions are my own. Photos courtesy of the manufacturer.