The new iMac features a 24-inch 4.5K Retina display with 11.3 million pixels, 500 nits of brightness, and over a billion colors.

Touch ID comes to iMac for the first time, making it easier than ever to securely log in, make purchases with Apple Pay, or switch user profiles with the touch of a finger.

“M1 is a gigantic leap forward for the Mac, and today we’re excited to introduce the all-new iMac, the first Mac designed around the breakthrough M1 chip,” said Greg Joswiak, Apple’s senior vice president of Worldwide Marketing. “With its striking design in seven stunning colors, its immersive 4.5K Retina display, the best camera, mics, and speakers ever in a Mac, and Touch ID, combined with the amazing performance of M1 and the power of macOS Big Sur, the new iMac takes everything people love about iMac to an entirely new level.” 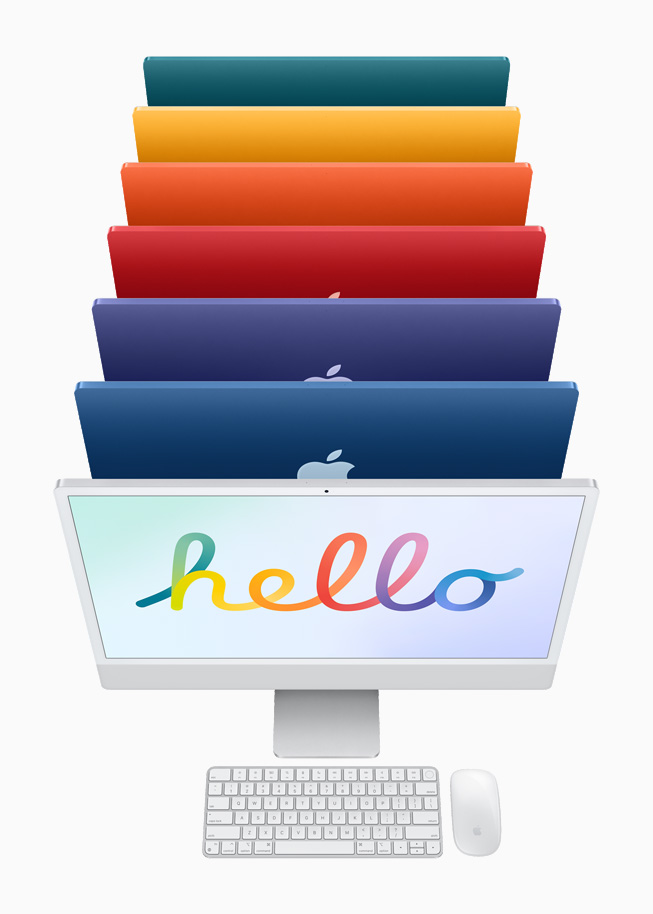 The new 24-inch iMac is available in an array of colors — green, yellow, orange, pink, purple, blue, and silver. The color options offer softer colors and thinner borders on the front, while the back features bold, saturated colors. The simplified design features a new power connector that attaches magnetically and a woven 2-meter-long color-matched cable.

The new iMac delivers powerful performance when compared to standard models of the 21.5-inch iMac, including:

The new 24-inch iMac is available to order beginning Friday, April 30, on apple.com and in the Apple Store app. It will begin arriving to customers and be available in select Apple Store locations and through Apple Authorized Resellers beginning in the second half of May.

iMac with 8-core GPU starts at $1,499 (US) and $1,399 (US) for education and is available in green, yellow, orange, pink, purple, blue, and silver. It features an 8-core CPU, 8GB of unified memory, 256GB SSD, two Thunderbolt ports, two additional USB 3 ports, Magic Keyboard with Touch ID, Magic Mouse, and Ethernet.