Apple today announced the release of an update to its iMovie app for the iPhone and iPad. The update adds two new types of video projects called “Magic Movie” and “Storyboards.”

Storyboards gives users a major head start in the video creation process, helping beginners learn to edit and improve their storytelling skills. Instead of starting with a blank timeline, creators can choose from 20 different storyboards featuring a variety of popular video types, including cooking tutorials, Q&As, product reviews, news reports, and more. Each storyboard has a shot list that organizes clips to tell a specific narrative. Each placeholder also includes an illustrative thumbnail, along with a tip that asks a question or makes a suggestion for how to shoot that clip to make it more interesting. For added customization, shots can be added, reordered, and deleted from a storyboard as needed.

Creators can experiment by applying different video styles that include titles and transitions, as well as options for title layouts, fonts, filters, and color palettes. Music tracks dynamically adjust to fit the length of a project, and users can refine each clip with intuitive editing tools like trim, split, clip speed, and clip volume. 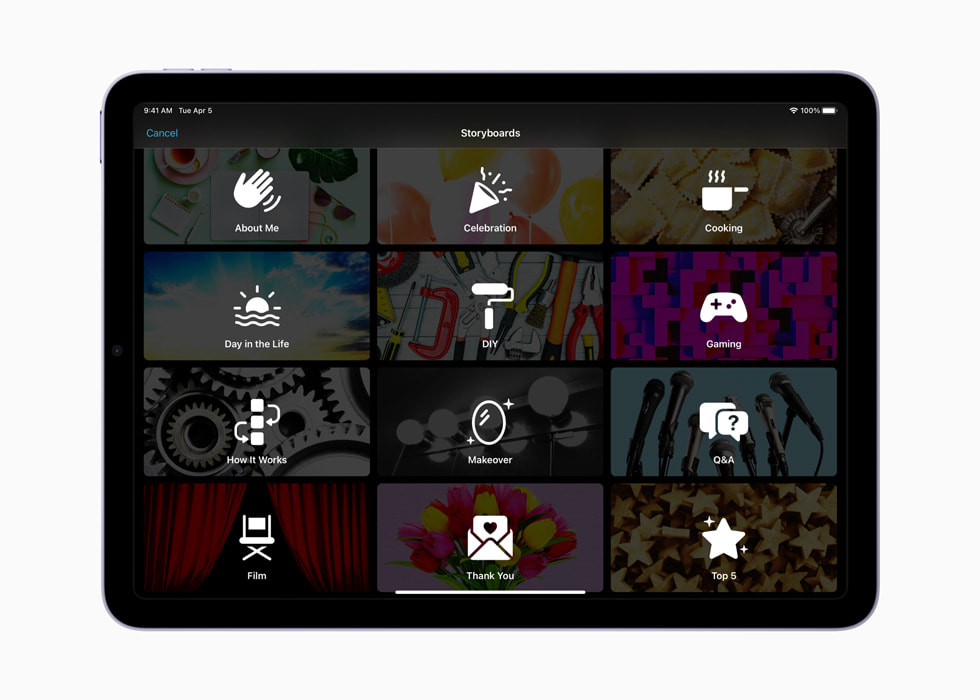 Magic Movie helps create custom videos — complete with titles, transitions, and music — in just a few taps. To create a Magic Movie, a user simply selects an album, or any group of photos or images from their library, and Magic Movie instantly identifies the best parts of the footage and creates the project.

Creators can then rearrange or delete clips in the simplified Magic Movie shot list, or by editing the project further. Styles can be added to change up the look and feel of the entire video. Like Storyboard videos, Magic Movies can be shared from iMovie via Messages, Mail, and social media.

• Get started, learn, and be inspired by two brand-new types of video projects: Magic Movie and Storyboards
• Create a Magic Movie to instantly make and share custom videos with titles, transitions, and music in just a few taps
• Select an album of photos and videos, and Magic Movie will create a polished video using your media
• Start with a Storyboard project to improve your storytelling skills using a template that guides you through the video-making process
• Choose from 20 Storyboards for common video projects like Cooking, DIY, Q&A, Product Review, and Book Report
• Customize and organize your storyboard video by adding, reordering, and grouping shots within the flexible shot list
• Learn different types of video framing and storytelling techniques with the shot tips provided in each type of storyboard
• Record video or take photos right into each Storyboard placeholder clip, or add media from your Photos library
• Enhance your Magic Movie or Storyboard video with 20 dynamic styles that include title layouts, fonts, filters, color palettes, and music
• Go further by editing clips with tools like trim, split, and clip speed
• Apply title treatments, record voiceover narration, or adjust the depth-of-field effect in Cinematic mode video clips* to further customize your videos
• Import Magic Movie and Storyboard projects into a timeline in iMovie for Mac or Final Cut Pro** to take your project further
• Save Magic Movie and Storyboard videos to your Photos library, send to friends and family via Messages or Mail, or share with your followers on social media
* Requires iPhone 13, iPad mini (6th generation), iPad Pro 11-inch or iPad Pro 12.9-inch (3rd generation or later)
** Requires iMovie for Mac version 10.3.2 or Final Cut Pro version 10.6.2

iMovie for macOS also received an update today with support for importing “Magic Movie” and “Storyboard” projects created with the iOS app.

iMovie 3.0, including the new Storyboards and Magic Movie features, is available today as a free update on the App Store for devices running iOS 15.2 or later and iPadOS 15.2 or later.