Facebook head honcho Mark Zuckerberg addressed the masses today in Palo Alto, California to announce three new features of Facebook: A new design, Skype-powered video calling, and a new group chat feature, all integrated into the web interface and available now! Unfortunately, despite prior speculation, they did not announce an iPad app. Also notably absent was an HTML 5 platform for iOS. 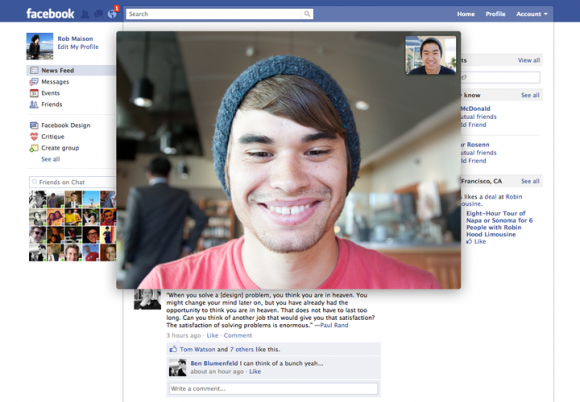 Zuckerberg and his team spent a great deal of time talking about Facebook’s new data center that makes what you’re about to read possible, but the most important in interesting bits of this are those things that Zuckerberg mentioned himself.

He mentioned that social networking is about sharing, it’s about what people are doing and about what content they are sharing. He continues to say that sharing on Facebook is now growing at an exponential rate, and an average Facebook user shares twice as much as they did this time one year ago – Zuckerberg predicts that this will double in 201

He also stabbed at Google a bit, and shot off a lot more opinions and projections about social networking, but the most important things he mentioned are a few new features. They have launched a new Groups feature, a redesigned chat that now supports multi-person chat, and video calling through Skype. He also unveiled a brand new design.

Facebook has written a blog post discussing the changes they have brought to chat, including the Skype-based video chat. Read their post here. They have also provided a video detailing their vew video chat functionality, which you can view below:

Additionally, Skype has provided a blog post explaining the new video chat service in Facebook and how it all works. We’ll provide more details on the changes as we hear about and discover them! You can watch the entire announcement direct from Facebook headquarters in the below video: