Supposed images surfacing on Chinese microblogging site Weibo have surfaced showing an alleged partially-assembled logic board for a next-gen iPhone. The photos show an A5 processor, and a battery similar to the iPhone 4, all connected to what appears to be a white front panel. 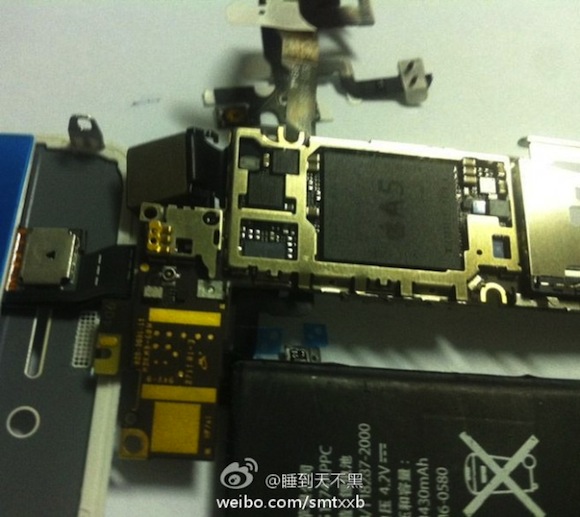 This news, which comes to us from Electronista, follows a report from last month showing photos of an iPhone 4S/iPhone 4 logic board very similar to the one currently found in the CDMA iPhone 4, leaving a space for an A5 chip.

The photo shows a very similar logic board with all the chips in place, appearing to be partially assembled, and connected to what looks to a white front panel, also showing a 1430mah battery on board.

While it’s often been suspected that Apple could include an A5 chip in the next-gen iPhone, this photo, if authentic, would seem to confirm it. There are a number of reasons to be skeptical about this rumor, however.

First, the battery shown in the leaked photo shows a 4.2Whr battery with a capacity of 1430mAh. It is suspicious, however, that the mAh rating is revealed on the battery, as this is not typically shown on the surface of iPhone batteries.

Another point of concern is that the display attached to this logic board appears to be one from an iPhone 4, and the cover for the proximity sensor is the older mesh-style cover, whereas Apple changed the design of that cover in the white iPhone 4 when it was released.

Also of note is that the actual source of this image has not been verified, the shot is rather blurry, and the A5 logo on the processor doesn’t seem quite right. In any case, take this image with at least one grain of salt. If anything, I’d suspect these parts to reflect a possible iPhone 4S rather than an iPhone 5.

Apple is widely expected to reveal the next-gen iPhone in early to mid October.