Intel has unveiled a new processor architecture called Ivy Bridge. With the inclusion of “3D: transistors, and a new 22nm architecture, these processors will be posed for superior performance, better energy usage, and will run cooler. The new technology is aimed at both desktop and mobile platforms.

The upcoming chips will be the first to use a 22 nanometre manufacturing process, which packs transistors more densely than the current 32nm system. Intel said it would also be using new Tri-Gate “3D” transistors, which are less power hungry. The below image compares Intel’s older planar architectures with the more tightly-packed and three-dimensional new architecture. 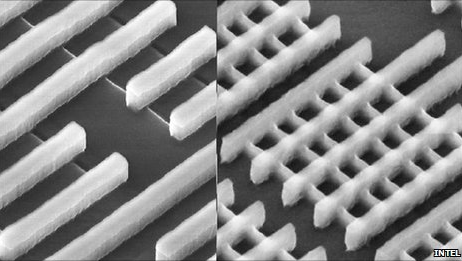 To be sure, you can expect that other manufacturers are preparing similar or competing technologies, but for the present moment, it appears that Intel had made a significantly leap forward in its position within the industry.

This is, if course, excellent news for the technology world… But what about everyone who just excitedly bought Sandy Bridge-based laptops? The good news for you is that Ivy Bridge is not due for release just yet, being scheduled for production later this year – and now you have something new to look forward to!

Also particularly notable is that, due to its lower power consumption and small form factors, the new Ivy Bridge processors, with their superior ability to process data and 3D imagery, may find their way into smaller consumer devices – such as perhaps the iPad and iPhone, or competing devices from other manufacturers.