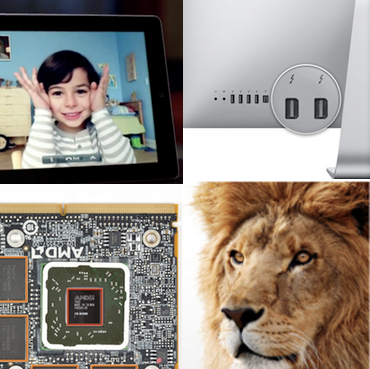 Were you too lazy to check MacTrast this week for all the big Apple stories? Well, you’re in luck because we’ve put together the top ten most read stories from the week of May 1st-7th.

iPhone 4 Used to Track Osama bin Laden
This is a joke, people.

New Apple Wireless Keyboard With Backlighting in the Works
Sign me up for one of these.

iPad 2 Commercial: “If You Asked”
Peter Coyote of E.T. lends his voice to a new ad for iPad 2 that warms the heart.

“Dear Sophie” ad for Google Chrome is very Apple-esque
Here’s another endearing ad, but this one is from Google. It looks like their ad agencies may be looking over one another’s shoulders.

New iMac Has Quad-Core CPU, Thunderbolt, 3X Graphics Boost, FaceTime HD Camera
The big story this week was the Apple Store shutting down Tuesday and re-opening with new iMacs. Check out the big upgrades it received and see what’s new and notable. It even has a removable graphics card.

What’s Happening With New iMacs and SSDs
The new iMac has the option to be built-to-order with dual conventional/SSD drives for better performance but you’ll have wait patiently for one.

Phil Schiller Says White iPhone Isn’t Thicker
What do you think? Is this another manufacturing goof? Take our poll.

What Happens When You Drop a MacBook From a 20-foot Balcony?
Here’s a notebook case suitable for most any condition.

Widespread testing of iOS 5 has begun, OS X Lion may be released as an App Store download, AT&T rep confirms no iPhone 5 this summer, and OS X Lion Developer Preview 2 gives a sneak peak of more new features including a potential Instapaper killer. Skype has a security hole and LG was to blame for the iPad light leak issue. Finally, Apple is sending Apple VP Bud Tribble to Al Franken’s mobile privacy hearing in the Senate this week, while the US government may allow its employees to work from home with the iPad.