JailbreakMe 3.0, a web-based jailbreak relying on a PDF security exploit, has arrived, and it has already jailbroken over 1 million iOS devices. Unfortunately, it’s days are already numbered, as Apple has pledged a security update that will fix the security issue that it relies on. 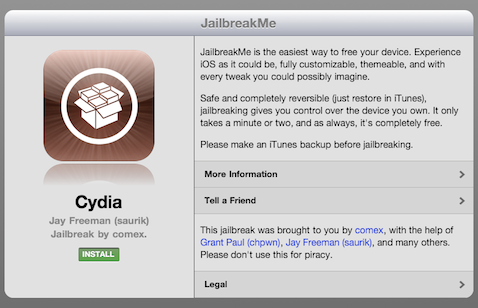 The trouble with the PDF exploit is that it allows hackers and other malicious folks to install potentially data-stealing or hazardous code to your iPhone just by visiting a website – the same way that JailbreakMe 3.0 jailbreaks iOS devices. Since the exploit can be used to wreak havoc on an iDevice, it’s the unfortunate fact that, while disappointing to some, killing JailbreakMe 3.0 is the right thing to do.

An Apple spokeswoman, Bethan Lloyd, has confirmed that Apple is aware of the issue, and is developing a fix that will be incorporated into Apple’s next iOS update which, due to the nature of the security risk, will likely arrive sooner rather than later (although no actual timing indication has been given).

If you don’t want to give up your jailbreak, but still want to fix the security issue, then you can download PDF Patcher 2 on Cydia, which will fix the issue without affecting your device’s jailbroken state.