After ordering a 15″ 2011 MacBook Pro on OS X Lion’s launch day, suspecting that there might be some interesting differences, I was disappointed when I finally received the new machine today, and found out what those differences are, the main one being that purchasers of a post-Lion MacBook Pro no longer have a quick and Apple-sanctioned way to recover from hard drive failure without Apple’s intervention. 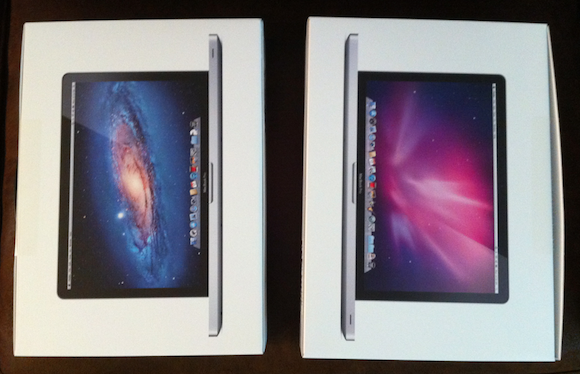 I compared the new Lion-enhanced unit I received to a second machine with identical specs that I’ve had since March. I compared the packaging, the manuals, and the MacBook Pro itself in order to discern all of the differences, most of which are relatively minor.

The below images illustrate the difference between the included pull-out packed in the old 2011 MacBook Pro (pictured first) versus the post-Lion version. 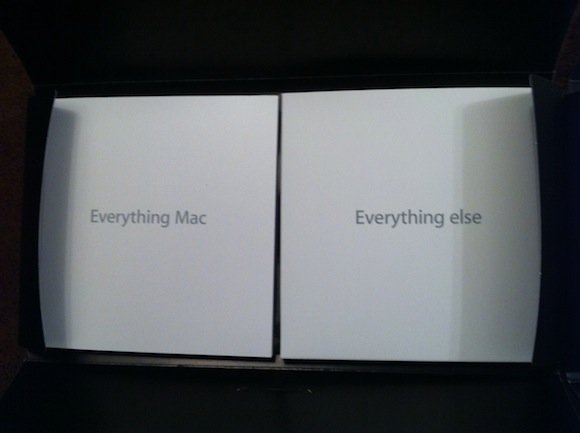 One of the most notable differences between the two units is the fact that the new post-Lion 2011 MacBook Pro no longer ships with restore DVDs, or restore medium of any kind for that matter – Its pull-out packet only includes Apple stickers, a warranty pamphlet, a screen cleaning cloth, and a booklet entitled “Hello.” 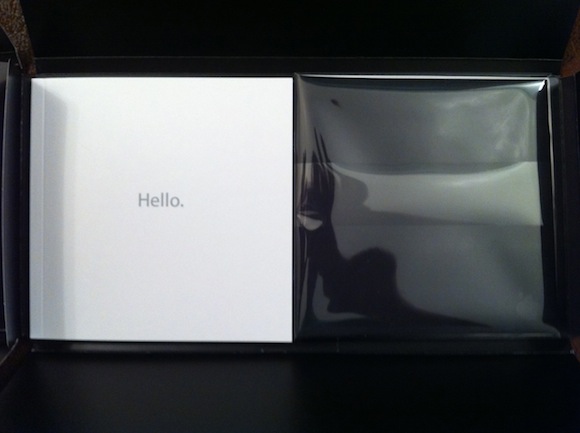 The older machine, on the other hand, includes an “Everything Mac” booklet instead of a “Hello” booklet and two restore DVDs – one for Snow Leopard and one for the bundled iLife applications installed on the machine.

2) Apple has updated the keyboard design, packaging, and even manuals of all Macs shipped after Lion’s release.

The external packaging of the new MacBook Pro 15″ includes a picture of a MacBook Pro running Lion rather than a picture of one running Snow Leopard. Also interesting is that the new model has both a different SKU and a different model number than its older but identical twin. The part number and SKU for the old unit are ZOM12LL/A and 8590948120, respectively. With the new unit, however, both the model number and SKU reflect a new number – ZOM10008A. 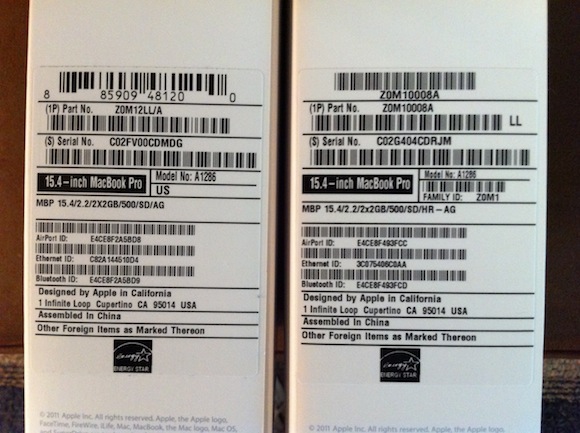 Also notable is that the F3 and F4 keys have been redesigned for Mission Control and LaunchPad, whereas the same keys on the older unit are the function keys for Expose and Dashboard. Additionally, the “Hello” book, which is basically a renamed version of the “About This Mac” book, has been updated to reflect Lion’s new features, as well as the new gestures in Lion. 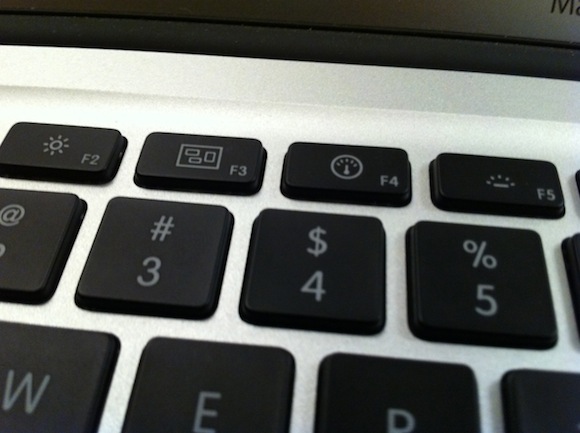 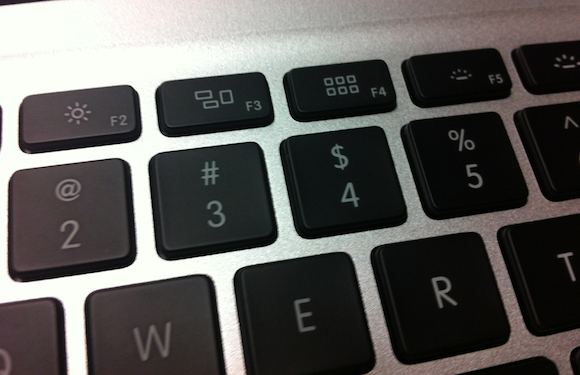 3) The new MacBook Pro I received contains build 11A511a rather than the build 11A511 that comes through the Mac App Store.

Another intriguing tidbit is that the new unit comes with a revised build of OS X Lion – rather than including the 10A511 app that comes from the Mac App Store, this machine featured a slightly revised built – 10A511a – although I have not yet found any differences between the two versions. 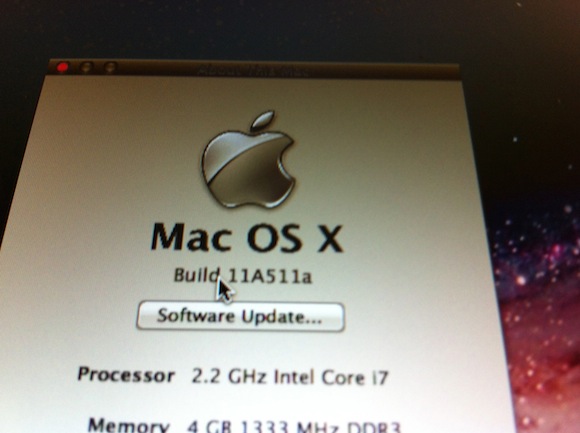 I initially looked at all these changes as positive ones that reflected Apple moving forward – moving away from optical discs towards features such as Internet Restore, the Lion Recovery partition, and so forth. Since the unit lacked any physical restore medium, I naturally suspected that, like the new MacBook Airs and Mac Minis that Apple just released, it must include Apple’s new Internet Restore feature. That’s when the disappointment began.

I tested out my theory that the new machine might have Internet Restore by removing the hard drive, and then attempting to boot the machine while holding down Command-R. Unfortunately, instead of being given the option to use Internet Restore, I instead merely got a picture of a folder with a question mark on it.

I tried two additional times, first plugging in a blank FireWire hard drive, and then installing a blank 2.5″ internal SATA drive. In both cases, I was NOT given the option to use Internet Restore, but was instead greeted with the same flashing folder with a question mark on it. 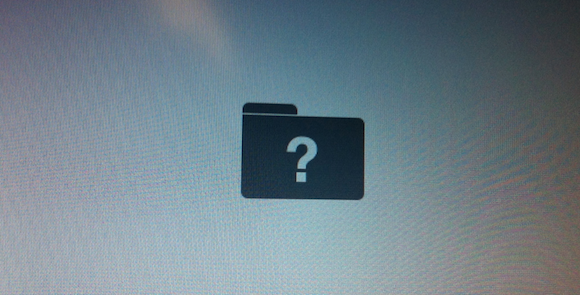 At this point, it seemed clear to me that the new 2011 MacBook Pro I received does not include Internet Restore. Ordinarily, I’d simply shrug the matter off as inconsequential – but the fact that Apple includes neither any physical restore medium NOR Apple’s interesting new Internet Recovery feature troubles me.

If a user were to experience hard drive failure under these conditions, they’d no longer be able to restore their machine themselves – instead, they’d be required to make an appointment with an Apple Retail Store or Authorized Service Provider, dropping the machine off, and depending on whether they had a new hard drive to install (they often don’t), you’d then have to wait at least a full business day and possibly longer before you could use your machine again. 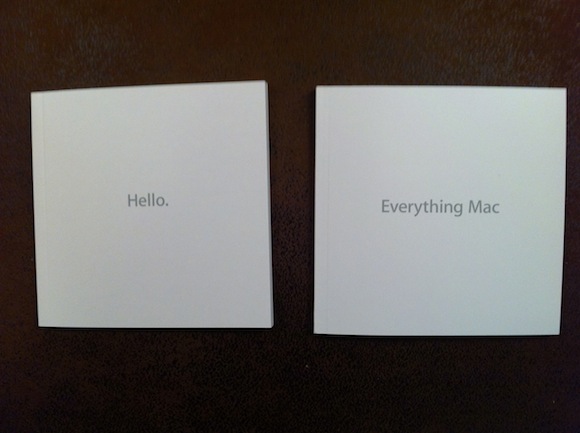 With the previous unit, however, it was a simple matter of swapping in a new hard drive, using your restore discs to re-install, then then restoring the machine from backup – a process which only takes a few hours.

While I respect Apple’s decision to stop including restore DVDs with post-Lion Macs, I’m extremely concerned that they haven’t given their users any means to restore from a hard drive failure short of packing up the entire machine and taking it to Apple.

To further fuel this concern, I wonder what’s going to happen to users that experience hard drive failure after Apple’s 1-year warranty or even their AppleCare agreement have expired? Presumably, they’d have to a pay a premium price for the repair, whereas previously a user could simply swap in a new hard drive and restore their machine. 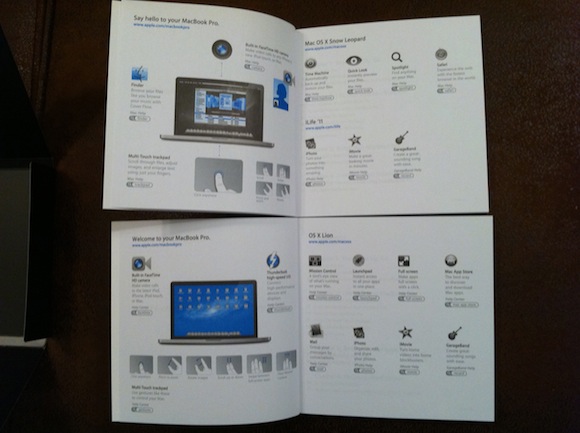 Further, while it’s true that a user that knows how to obtain an installer for Mac OS X Lion (considering that if you purchase a new machine with lion you cannot download the Lion installer from the Mac App Store) could then dig around in the package contents and create their own bootable Lion installer, this is still a significant hurdle for someone to jump through – and it’s a course of action that Apple doesn’t sanction, as you’d essentially be forced to download and use a bootlegged copy of Lion in order to make it work.

Unfortunately, it doesn’t appear as though there is a solution to this problem for all users – at the moment of my writing this report, it seems very much that the only ways around this problem are to obtain and download a Lion installer through an unauthorized method, or to take your computer to Apple or an authorized service provider in case of such a failure, and possibly incur significant repair fees if your warrantee is intact. 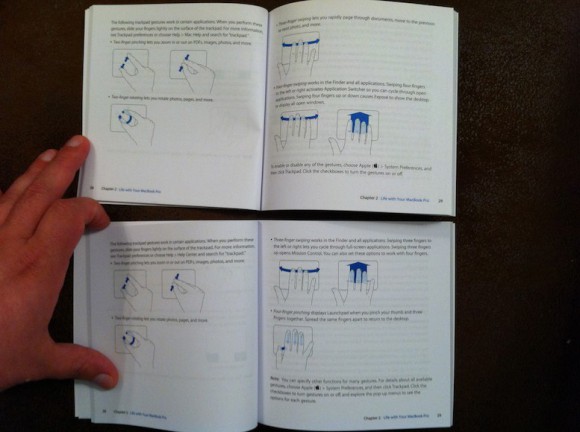 I should hope that Apple will respond to this problem by either making Internet Restore available in all of their currently shipping Mac models, or to being including a physical restore medium of some kind with shipments of new Macs, while offering to send a restore DVD or flash drive to users who are left stuck in a possible predicament. They could also make a downloadable restore disc available, along with instructions on how users could burn it to a DVD or copy it to a USB drive or external hard drive.

Fortunately, it does appear that Apple will be making a USB drive containing OS X Lion available in August – perhaps they could ship some out early to users affected by this issue. In the meantime, however, I will be reaching out to Apple, who will hopefully be able to provide some answers about this matter soon.

What are your thoughts?