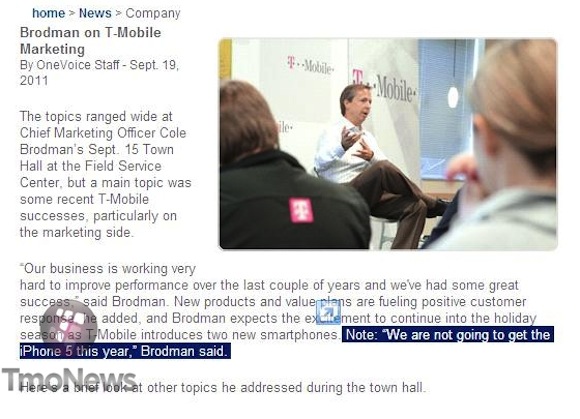 Instead, T-Mobile will allegedly introduce two new smartphones to spark customer interest ahead of the holiday season. The authenticity of the leaked document is unknown, as is the nature of quote itself, so we are considering this as an unconfirmed rumor.

Indeed, unless T-Mobile refused the iPhone 5 themselves, it doesn’t make much sense – rumors have indicated that Sprint will get the iPhone 5 alongside AT&T & Verizon, and if so, it would make little sense for Apple to exclude T-Mobile from the iPhone 5 release.

Prior reports have also indicated that Apple has been testing an iPhone on T-Mobile’s network, and supposed anonymous comments from a T-Mobile executive have suggested that T-Mobile will, in fact, get the iPhone 5 on their network at launch. T-Mobile has so far not issued any comment on the matter.

The iPhone 5 is widely expected to be released in early to mid October, with or without T-Mobile as a US carrier.