Ever wanted to get all up close and personal with NASA’s spacecraft? Now you can. NASA has just launched its Spacecraft 3D app, which gives you the chance, using augmented reality, to get a full 3D view of the Curiosity rover and the GRAIL spacecraft, TUAW reports. 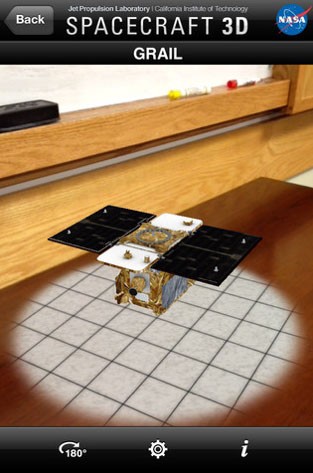 You launch the app and then print out a target that you put on your desk or a table. The target allows the app to construct a spacecraft that you can see in three dimensions as your walk around it or change your elevation. Currently, the app features the Curiosity rover that will set down on Mars August 6, and the twin GRAIL spacecraft that are currently in orbit around the moon.

“Let’s say you want to get an idea what our Curiosity Mars rover is all about,” said Kevin Hussey, manager of visualization technology at JPL. “Like Hollywood directors sizing up their next shot, you move your camera-equipped iPad or iPhone in and out, up and down and the spacecraft perspective moves with you. It is a great way to study the 3-D nature of NASA spacecraft.”

It certainly looks like a cool and slick use of augmented reality, so if you want to give it a try, download it here.