The 2012 Summer Olympic Games are just around the corner, set to kick off Friday, July 27, and run through Sunday, August 12.  For a select few, this will be an incredible and memorable experience, while the rest of us are left as spectators, dreaming of what it could be like to take part in the international contest.  While it may seem like a pipe-dream, Developer NEOWIZ Internet Corp has introduced “London 2012,” allowing the rest of us to take a shot at the competition!

London 2012, $2.99 in the App Store, is the official iOS game of the 2012 Summer Olympics. Featuring nine olympic events, three game modes, eight languages (for international competitors), London 2012 is fun and easy for users around the world! 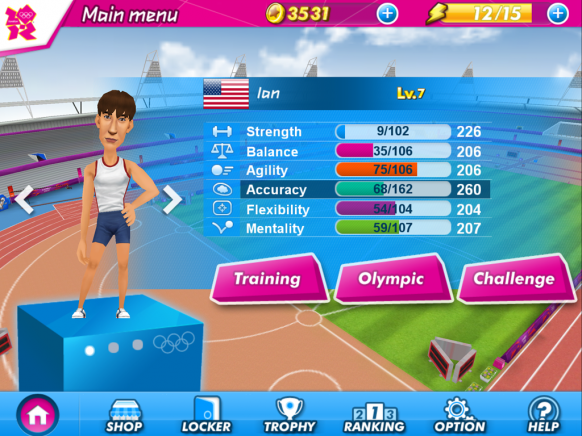 To start competing, you must first create a character.  You are able to configure the characters look, country, and primary strength.  From there, you can begin to train or compete as an olympic athlete.  Competition initially allows you to run the 100m Dash, swim the 100m Freestyle, and also enables trap shooting.

Training mode is a fast and easy way to build your stats in a variety of fields (strength, balance, agility, accuracy, flexibility, and mentality).  You can also earn stars, which enable you to unlock more events (archery, kayaking, hurdles, pole vault, etc), “buy” different competition equipment, and get food to replenish your stamina.  In training mode, even a new player can score high marks and gain more stars. 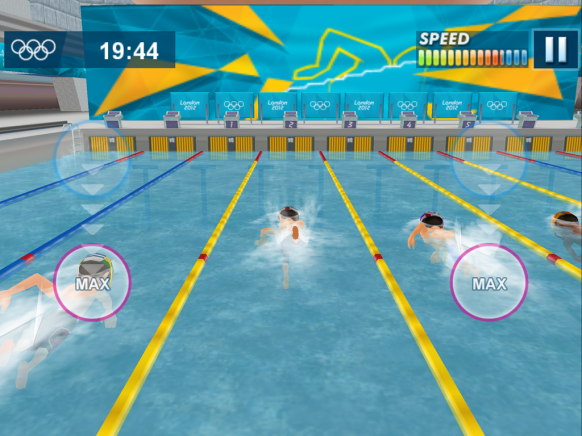 Olympic mode events begin to get more exciting, as the competition gets tougher, faster, or scores more points.  As you achieve higher placings in Olympic mode, you are able to advance from regional matches to national competition, and then on to the olympics.

Challenge mode is the final, and most unique, gameplay mode.  You are presented with several missions to complete, and once successful, you are advanced to different Olympic modes, earn more stars, and increase your players stats.  Each challenge is worth a certain number of stars, but requires a different amount of stamina, so keep an eye on your stamina to know if you are able to take part.

Throughout the different modes, you are presented with helpful tips on how to earn more points or increase certain statistics more quickly.  The help section is also full of great information that can improve your experience, with tips on how to maximize your characters abilities and how each feature of the game can impact your playing. 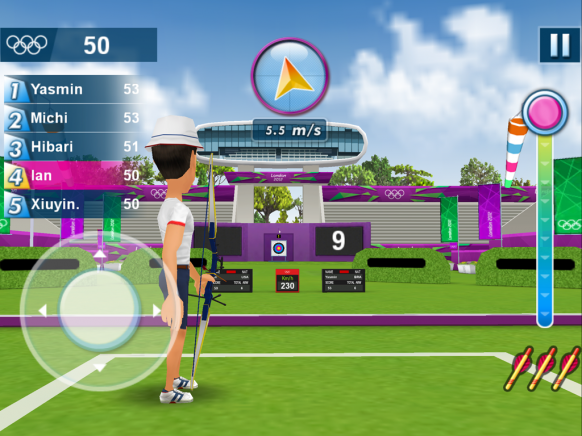 London 2012 is a fun and creative way for iOS device owners everywhere to compete in the summer games.  The variety of events, creative use of on-screen control, and active standings among players across the world make this an exciting game to play.  If you enjoy watching the Olympics, you will enjoy becoming part of the competition with London 2012 for iOS. 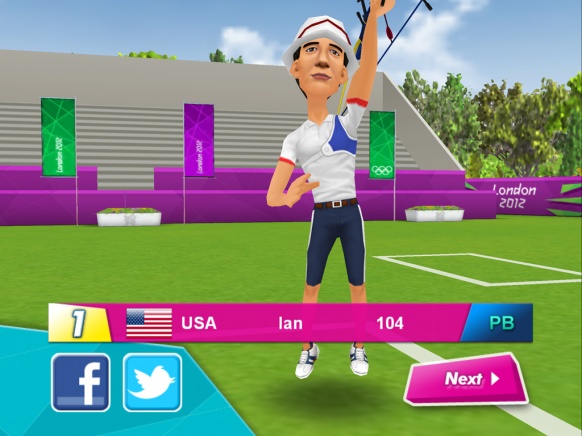