We shared all of the Mac startup chimes with you earlier this week, but did you know something like that could be trademarked? Patently Apple reports that the U.S. Patent and Trademark Office has officially granted Apple a registered trademark for that harmonious sound you hear just as your Mac starts up. 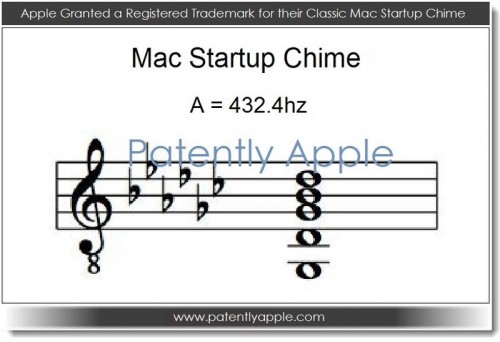 The original chiming sound was created by Apple programmer Jim Reekes, who designed many of the system sounds for the Mac OS, including that iconic startup chime roughly 20 years ago. Apple has used several different variations on the chime over the years, including a shift in pitch to the current tone Apple notes as having been in use since early 1999.

Apple’s trademark application, which was filed in June of this year, states that the chime is “a sound mark consisting of a slightly flat (by approximately 30 cents) G flat/F sharp major chord.”

The sound is used by Apple to signal that the startup diagnostics have found no hardware or software problems.

Also check out this video of every Mac Startup Chime ever!