While Taylor Swift and Apple Music may not have started off on the best of terms, they popular singer has certainly cozied up to the streaming service, as on Thursday, she tweeted the third in what is a continuing series of humorous Apple Music-themed ads. 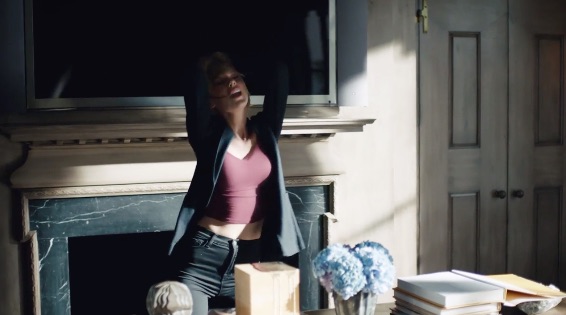 The new video features Swift promoting an Apple Music playlist called “Friday Night Rocks!” which in the ad is recommended to the popular songstress on the “For You” tab of the streaming music service.

In place of lip syncing the song as she did a Jimmy Eat World tune in a previous ad, she dances around her living room to The Darkness’ “I Believe In A Thing Called Love.” The ad ends with the tagline: “Dance Like No One’s Watching.”

Apple Music head of content Larry Jackson has confirmed that an entire series of commercials had been created featuring Swift, and they would continue to be released periodically, much as singles from an album are.

Taylor has appeared in two previous Apple Music ads. The first, “Distractingly Good,” features Swift on a treadmill, quickly getting distracted by her Apple Music workout playlist. Slapstick comedy soon ensues. Ad #2 features the singer enthusiastically lip syncing to the “Jimmy Eat World” tune “The Middle,” as she prepares to go out for the evening.