It wasn’t long ago that developing apps for iOS was seen as a potentially lucrative business. Developers could create an app, and offer it free with ads, or sell an ad-free experience at an up-front cost. In the past few years, however, that tide has shifted, and more and more apps are offering a free app (up front, at least), and using Apple’s in-app purchase system to make their money. Ultimately, this nickel-and-dime approach has made it possible for big players with big budgets to get rich, and leave independent developers (and small studios) fighting over a very small piece of the pie.

A new study out of app analytics company SensorTower now estimates that 94% of the U.S. App Store revenue is attributed 1% of app publishers. In terms of dollars and cents,

“…approximately $1.34 billion of the estimated $1.43 billion in net revenue generated by the store during Q1 went to 623 publishers, the remaining 6 percent—approximately $85.8 million—was divided among the other 61,677 publishers whose apps are paid or feature in-app purchases.” 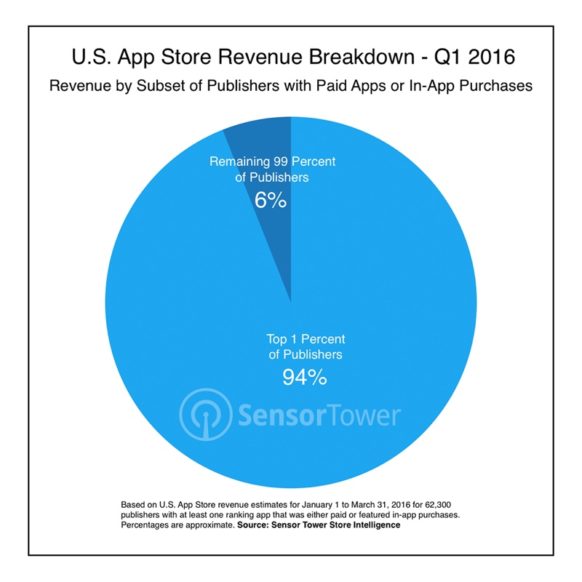 Among that top 1% were SuperCell (the publishers of “Clash Royale” and “Clash of Clans”), as well as “Candy Crush” publisher King, music streaming service Spotify, and video streaming services like Netflix and HBO. SensorTower does note that:

“…prominent shopping and services app publishers, such as Amazon and Uber, were not included in this analysis as they do not generate revenue via paid apps or IAPs.”

Ultimately, for most consumers, this means very little, but the numbers are still incredible. In a recent episode of Interface (a podcast I co-host), we discussed how many of these freemium games are funded by a small number of in-app purchase “whales,” who may drop $10,000 or more every month.

Apple has long said the App Store was a lucrative business, and it appears that for some publishers, that truly is the case. In the same vein, for a very small percentage of customers (about 0.15% of In-App Purchases), these apps have become an incredibly expensive hobby. For me, personally, I believe in supporting developers, but find my money is better spent on quality apps and services, not in-game currency.

What’s the most you’ve every spent on in-app purchases or content in a single game? Let us know in the comments below!