Pokémon GO hit the App Store just yesterday, but it has already hit the top of the App Store charts. Now comes a word of caution from Australian police. 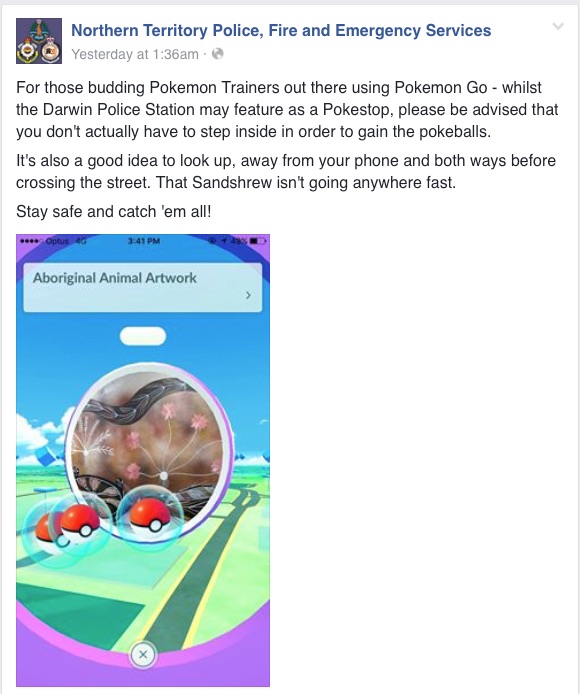 The augmented reality game works by encouraging players to go looking for things in the real world, which is not without its hazards. Australian police have to warn players not to get too carried away while trying to catch a Sandshrew.

It seems one of the locations you can catch a Sandshrew Pokémon is at the Darwin Police Station in northern Australia. Police officers there have noted a few issues with the hunt for the wily Sandshrew.

First, users are so intent on staring at their screens, they are crossing the road without looking for traffic. And they are then entering the police station building in their pursuit, something that isn’t actually necessary.

The Northern Territory Police, Fire and Emergency Services has now placed an warning on its Facebook page.

For those budding Pokemon Trainers out there using Pokemon Go — whilst the Darwin Police Station may feature as a Pokestop, please be advised that you don’t actually have to step inside in order to gain the pokeballs.

It’s also a good idea to look up, away from your phone and both ways before crossing the street. That Sandshrew isn’t going anywhere fast.

Stay safe and catch ’em all!

So, remember to look up and take note of traffic while searching for a Pokémon, and don’t go running into a police stations yelling, “where’s the damn Sandshrew! I know you’re holding him here, set him free!”

Pokémon Go is already available in the U.S. and other App Stores, and should soon be available in all of them soon, as the game is propagating to the various App Stores.