Camera+ has long been considered one of the premiere apps for iPhone and iPad photographers. However, it had been over two years since an update for the iPad version of the app. The long-awaited update has finally arrived. 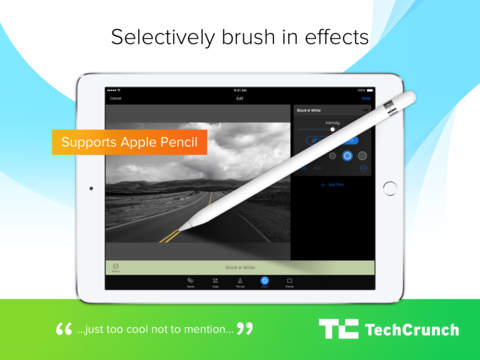 Camera+ for iPad 2 brings the professional photo editing features of The Lab that iPhone users of the app have previously only had access to. The iPad version of the feature brings selective brushing of edits and filters. Version 2 also brings Apple Pencil support, offering fine precise control of brushing.

Camera+ for iPad 2 is finally here! Get ready for this big update with an all-new, slick, modern user interface.

Version 2 sports the world class, professional photo editing that you users of Camera+ for iPhone have been enjoying via The Lab. But the iPad version takes photo editing to a new level by supporting selective brushing of the various edits and filters. And those of you who own an Apple Pencil will appreciate it even more because we’ve also added Pencil support, enabling you to get very fine, precise control over brushing with it.

Here’s the extensive list of powerful tools available to you in The Lab:

Camera+ for iPad 2 is now available for $4.99 in the App Store. Previous owners of the app can upgrade for free. [GET IT HERE]