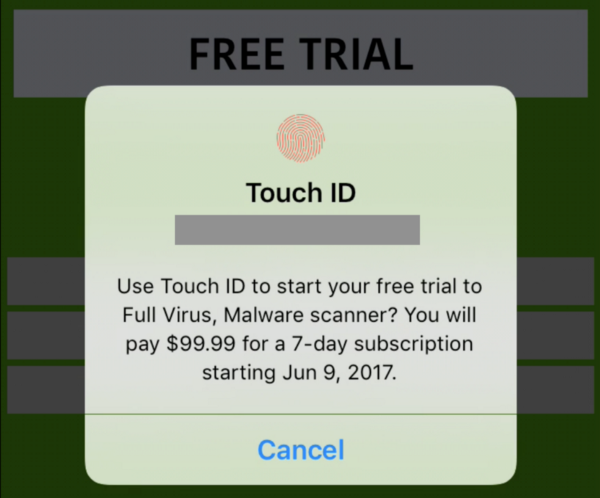 Developer Johnny Lin describes how he discovered the scam, which has become a popular way to get unsuspecting users to pay a monthly subscription via in-app purchases for what amounts to basically nothing at all.

I scrolled down the list in the Productivity category and saw apps from well-known companies like Dropbox, Evernote, and Microsoft. That was to be expected. But what’s this? The #10 Top Grossing Productivity app (as of June 7th, 2017) was an app called “Mobile protection :Clean & Security VPN”.

Given the terrible title of this app (inconsistent capitalization, misplaced colon, and grammatically nonsensical “Clean & Security VPN?”), I was sure this was a bug in the rankings algorithm. So I check Sensor Tower for an estimate of the app’s revenue, which showed… $80,000 per month?? That couldn’t possibly be right. Now I was really curious.

In an attempt to figure out how an app like this could earn a place in the top grossing app list, Lin installed and ran the app. He was immediately prompted to begin a free trial for a “anti-virus scanner.” Tapping the trial offer, Lin was presented with a Touch ID authentication prompt, informing him he would be paying $99.99 for a 7-day subscription, when his “free trial” ended on June 9, 2017.

Lin’s article explains how less than honest developers are taking advantage of Apple’s App Store search ads, due to the lack of filtering or approval process for the ads. The ad’s are almost identical to the normal search results in the store, and some ads will take up the who first page of search results.

Lin says several apps are making bank from similar scams, with such apps showing up in the App Store’s top grossing lists with regularity.

While it’s uncertain how these bogus apps made it past Apple’s usually stringent approval process, they are making it into the store, and the search result ads are enticing users into downloading the apps and possibly getting scammed for a worthless in-app subscription.

If you discover apps like described here in the App Store, be sure to report the app to Apple, and warn your friends and family about the scam.