In an interview with Popular Mechanics, the duo said that to allow the processing power of the Mac Pro to reach its potential without melting, engineers had to develop new ways to “exploit the laws of thermodynamics.”

The Mac Pro’s active internal cooling consists of three axial fans in the front of the case and a blower in the rear. All of those components had to be developed in-house, as off the shelf fans would have been too loud. 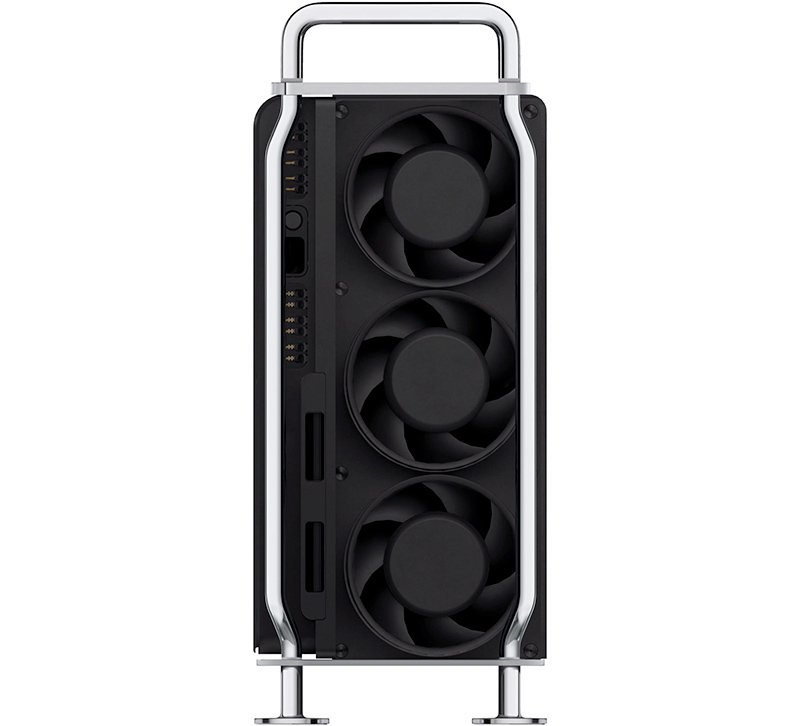 “Years ago, we started redistributing the blades,” explains Ligtenberg, Apple’s senior director of product design. “They’re still dynamically balanced, but they’re actually randomized in terms of their BPF [blade pass frequency]. So you don’t get huge harmonics that tend to be super annoying.”

Surprisingly, Ligtenberg says the solution is borrowed almost entirely from automobile tires. There’s a bit of math behind it, but you can create broadband noise instead of total noise with that technique.”

Something loud but pleasantly pitched can be more tolerable than something quiet but irritating. “You can have something at a certain SPL [sound pressure level] that sounds really good, but you can have something that’s actually at a lower SPL that grates on your nerves and sounds really awful,” says John Ternus, VP of Hardware Engineering at Apple and head of the Pro and Pro Display’s development. “We want to get really great performance where, you either can’t hear it, or if you can hear it, it’s kind of a pleasant noise. A ton of analysis goes into figuring out how to optimize for that.”

Ideally, Mac Pro users won’t be aware of the cooling fan activity, thanks to the grids of bored metal divots on the front and back of the case and the rear of the Pro Display that provide the passive cooling. “[The pattern] gives us a lot of surface area, which is hugely beneficial,” Ternus says.

Apple says the the reworked “cheese grater” look allows for around 20% more airflow compared to the Power Mac that preceded it.

The Pro Display has fans for specific components, but the bored metal holes are what keeps that panel of LEDs cool. A traditional finned enclosure heatsink couldn’t be used, as the monitor can be used in both portrait and landscape modes.

Rotating the display 90 degrees would reduce with the air flow through fins, but the hemispherical holes work the same regardless of which way is up. “[For the Display] we wanted free [air] flow through the channels, no matter the orientation,” says Ternus.