Apple’s latest and greatest mobile operating system, iOS 10, debuted a little over 5 months ago, and it has already made it onto 79% of iOS devices. (Source: Apple) 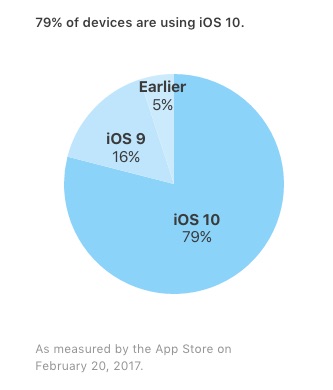 iOS 10 Tracking Ahead of iOS 9 at Same Point

That figure is based on App Store tracking data as of February 20. The same data shows that 16% of iOS devices are still running iOS 9, while 5% are running some earlier version of iOS. iOS 10 is showing a slightly better rate of adoption than iOS 9 did at the same point in its life. iOS 9 was on 77% of devices at the same time last year.

Apple didn’t offer up any contributing data as to why iOS 10 is performing so well, although excellent sales of the iPhone 7 and iPhone 7 Plus handsets, which come with it installed out of the box, are a contributing factor.

iOS 10 will continue to be the latest and greatest version of Apple’s mobile operating system, until iOS 11 debuts at WWDC 2017 in June. A lengthy beta testing period will follow its introduction, and it will then go public alongside the debut of the 10th anniversary iPhone this fall.